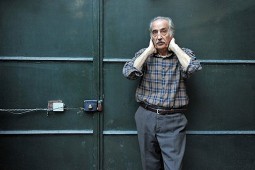 In an interview with IBNA, Sepanlou said: “Kafka’s Hospital is an imaginary place which, in this work, I have been inspired by the hospital located next to our house. The man in charge is playing backgammon while he turns someone into a cockroach at once.”
The veteran poet and translator further added: “With my new line setting, this book is about 140 pages of which 70 pages belong to long poems and the other 70 consists of long and short poems which I have composed before this New Year. I cannot, of course, write as much lately due to my illness. However, I think you will be faced with a new construe in this collection as it does not resemble my other poems.”
The poet of the verse ‘Lady of the Time’ added: “Kafka’s Hospital is in fact a kind of surrealistic approach inspired by reality. Like, for instance, imagine the doctors’ signboards hanging from the lamp posts and are constantly broken by children’s stones hitting them, and birds fly through them instead of showing the doctors’ address.”