Author compiles a book on Strindberg’s influence on Bergman

Publish Date : Monday 13 April 2015 - 00:00
IBNA- The Iranian translator of August Strindberg’s plays into Persian Javad Atefeh says that he is working on a book which describes the influence of this prominent Swedish dramatist on the legendary filmmaker Ingmar Bergman. 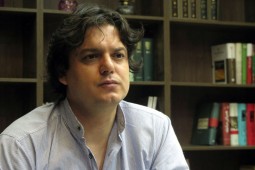 In an interview with IBNA, Atefeh referred to the passionate enthusiasm of Bergman for his compatriot, August Strindberg who had died in 1912, six years before the birth of Bergman: “the great Swedish filmmaker considered himself as the son worthy of August Strindberg and in different parts of his life he said as if he had conversed with the Swedish playwright.”
“In 2014, The Strindberg Museum in Stockholm invited to me to Louise eight and exhibited Shen featuring the works of Bergman influenced by Strindberg. At that event I watched films taken from Bergman's the staged works based on the plays of Strindberg as well as Bergman's TV interviews in each he had spoken about Strindberg,” Atefeh said.
Describing his sources for writing this book, the translator stated: “Bergman has a number of autobiographical books and diaries in which he refers to Strindberg several times. Furthermore, The Strindberg Museum gave me the TV interviews of Bergman and his theatrical performances based on Strindberg’s plays.