Publish Date : Sunday 4 July 2010 - 17:06
The English version of "Ambush of July 1982", a book by Hamid Davood-abadi was unveiled today morning (Sunday July 4) in Reseneh culture house. Commander Seyyed Mohammad Bagher zadeh, the head of Foundation for the preservation of relics and values of the Holy Defense, and a group of holy defense authors attended the ceremony. 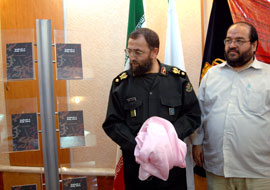 IBNA: The deputy of Resaneh culture house, Mohammad Lesani welcomed the guests and explained news tactics, used in national and international media, which were released on the 4 Iranian diplomats who were kidnapped by the Zionist regime.

Then Commander Seyyed Mohammad Bagher zadeh said: "Although the diplomats were secured but 3 mistakes were made; they names were not registered by the Red Cross according to Geneva Conventions, cover-ups and the silence of assemblies and human rights defending organizations about the incident.

He underlined:" Unfortunately Iran's cinema and TV didn’t produce anything about the kidnapping while Hollywood has produced several anti-Islam works."

He went on to say that the incident should be cleared transparently and added: "The same incident happened to Imam Mousa Sadr and his partners."

Finally Bagher zadeh said: "I express my gratitude to Hamid Davood Abadi for compiling the book. Hope that the book will be translated into other languages."

In other news, Hamid Davood Abadi said: "28 years has passed since the kidnapping. Although Iran was involved in the imposed war, they traveled to Lebanon to help and were held captive."

He underlined: "The incident has remained untouched and according to my researches which were done for compiling the book I learned that only a few statements were released."

The incident was the longest captivity following Imam Mousa Sadr's incident. He emphasized that the book was penned according to national data and a trip to Lebanon which toke 10 years for writing.

Ahmad Motavaselian", "Seyyed Mohsen Mousavi", "Kazem Akhavan" and "Taghi Rastegar" are the 4 Iranian diplomats kidnapped in 1982 in Lebanon by Zionist groups. Iranian government has continually been trying to know their location and the conditions they are in.

The English book was finally unveiled by Seyyed Mohammad Bagher-zadeh.