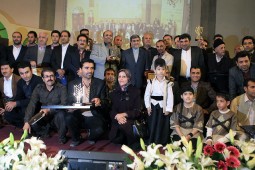 A group of bibliophile villager with former Iranian Culture Minister Ali Jannati (center) ‎‎
The program ‎was launched jointly by a variety of different stakeholders including official ‎and civil organization as well as NGOs and private sectors. In order to ‎participate in the festival, the villages are required to present both their ‎past and present capacities and achievements as well as their plans for ‎development of reading initiatives and facilities within the village.
‎
History
After the introduction of Iran’s Book Capital, there was a need to take ‎some actions for villages and rural areas. Therefore, ‎a special plan was designed as villages could introduce their ‎special capacities and launch new programs to develop it. ‎
Since the early introduction in 2014, in 5 years, four calls were made ‎and a significant number of villages replied and applied for the title. ‎

In the first year, about 620 villages participated in the festival and this ‎increased to 1300 villages in the fourth year. The profile of each village, ‎including reports on their past achievements and activities and ‎documents on their future plans, undergoes a series of assessments and ‎evaluations. Finally 20 villages are introduced as the candidates and then ‎only 10 villages are designated as Bibliophile Villages.
‎
Objectives
‎1.‎ Development of infrastructures and activities at the rural level for ‎promotion of reading;‎
‎2.‎ Provision of a field for collaboration between public and private ‎stakeholders as well as NGOs and independent reading activists;‎
‎3.‎ Allocation of public and private capitals and resources for ‎promotion of reading and books;‎
‎4.‎ Indirect promotion of future plans and middle and long-term ‎planning at local level;‎
‎5.‎ Supporting new and innovative ideas for reading promotion;‎
‎6.‎ Decentralization and tendency toward planning at the local level;‎
‎7.‎ Design and implementation of attractive and popular programs for ‎reading promotion.‎

Executive Procedures
The festival is the result of joint efforts by a variety of stakeholders from ‎public and private sectors in rural settings and for the promotion of ‎reading and development of related capacities. In order to participate in ‎the event, the villages are required to provide reports and documents on ‎their past achievements as well as their plans for future activities. These ‎reports should be signed by local authorities and the head of village ‎council and posted to the general secretariat office of the festival in ‎Tehran. ‎

There are two broad categories for the activities and initiatives of every ‎village:‎
‎●‎ Infrastructural activities such as building and equipment of ‎libraries, allocation of land for such purposes and other ‎construction affairs;‎
‎●‎ Promotional activities such as reading contests, book fairs, festivals, ‎inviting writers, and any other activity for the promotion of books ‎and reading culture.‎

According to this, every village will submit a profile. Then the secretariat ‎and the consultative body will evaluate the past activities and future plans ‎in two distinct phases and eventually decide on the name of candidates ‎and the final list of bibliophile villages. ‎

Results
The festival has not only influenced reading in villages and rural ‎societies, but also it has shown significant social outcomes. Reading has ‎actually served as an axis for social coherence and harmony. There is a ‎meaningful change in the general image of the village.

State officials ‎and key businessmen who hardly step into the villages are seen several ‎times during campaigns and ceremonies. Village council members find ‎new and more fundamental infrastructures to build for the people, the ‎infrastructures that empowers people to think and to talk and to build ‎even more.
‎
Also, people find new contents and subjects to fill in their newly ‎discovered social media; they can even talk about their experiences of ‎collective reading to other people all over the country and globe. ‎Geographical barriers have already been shattered, now is the time to find ‎new languages and subjects for expression. Village kids find and follow ‎their favorite authors in social media.
‎
Whatever is done in the name of books and reading in these villages ‎certainly goes far beyond the activity of reading promotion, reading in ‎these villages acts as a social institution. It is a space and a device for the ‎wider presence of women in social affairs.‎

Considering the fact that in the past, much has not been done in a planned ‎and coherent manner for reading promotion in villages, this event has ‎been welcomed by the villagers and has been widely reflected in rural ‎settings. ‎