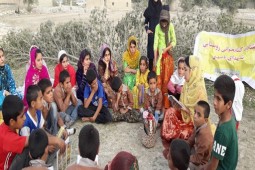 Esmail Yazdanpour- These groups and individual book promoters have started forming networks and communicating with each other, thus learning from each other and using new ideas and methods for reading promotion in every corner of the country. As a result of these emerging networks in different cities and villages, municipalities are planning fresh cultural projects around books and reading, village authorities have recognized village libraries as centers for public to participate in rural development projects.

Moreover, individual and organizational reading projects are now recognized and are finding new languages and platforms for communication of ideas and experiences. All these are is boosting writers, publishers, book distributors, bookstores and libraries who in turn, find their specific location within the network. Even the social media, once recognized as a threat to the book, is serving the flow of books and promotion of reading within different layers of society.
Today reading promotion initiatives in Iran have found their due central position and every cultural, educational, environmental activist, has discovered the pivotal role reading promotion campaigns can play for development of any benevolent project.
This is a brief report on some of the main initiatives for reading promotion in Iran. Although such a general report cannot cover all the creativities and new energies that are activated in the field, it clearly shows a map of the prodigious position of such projects at every level of the Iranian society.

‎1. Designation of Iran’s Book Capital
Iran’s Book Capital is a project for annual selection of a city as ‎National Book Capital. The general idea is borrowed from UNESCO's ‎World Book Capital but in practice, it has been specially adopted ‎according to specific conditions and requirements of Iranian society. ‎

In the first call for proposals in 2014, 64 cities from around the country ‎submitted their reports and plans for the title. ‎

After a series of expert assessments, 10 cities reached the final stage and ‎were introduced to the nomination committee. Based on the objectives ‎and evaluation indicators, the nomination committee, introduced five ‎cities of Ahvaz, Yazd, Bushehr, Gonbad-e Kavus and Neyshabur as final ‎candidates. ‎
In the final stage, the nomination committee announced Ahwaz as book ‎capital of Iran for 2015. That was due to "innovative, participatory, effective ‎and coherent programs, and the use of the capacities of the private sector, ‎public organizations, industries and sports and cultural centers for book ‎promotion." ‎
In the second call, 99 cities participated and submitted their plans and ‎programs for book promotion in 2016, leading to presentation of Bushehr, ‎Neyshabur, Shiraz, Yazd, Shahrekord and Ray as final candidates and the ‎final winning of Neyshabur as the second book capital of Iran for 2016. ‎
The third call was answered by 102 cities from around the country, which ‎led to the nomination of Evaz, Kashan, Bushehr, Zarand and Shahrekord ‎as final candidates. Eventually, the city of Bushehr was designated as book ‎capital for 2017.‎

In the fourth year, the cities of Mahabad, Sadra, Kashan, Dezful, and Yazd ‎were introduced as final candidates and it was the historic city of Kashan ‎that won the final title.
‎
Objectives Were: ‎
‎1.‎ Development of infrastructures and activities for book promotion ‎in large and small cities; ‎
‎2.‎ Development of cooperation between civil, non-governmental ‎institutions with public and state organizations; ‎
‎3.‎ Using the public and private capital and facilities for the promotion ‎of reading; ‎
‎4.‎ Promotion of cultural planning for promotion of books; ‎
‎5.‎ Acknowledging and supporting innovative ideas for book ‎promotion;‎
‎6.‎ Decentralization and promotion of planning at local level for book ‎promotion and other cultural activities; ‎
‎7.‎ Development of attractive and popular programs in the field of ‎reading. ‎
Affiliated institutions and organizations
•         UNESCO National Commission ‎
•         Iranian Organization of Municipalities and Villages
•         The Institution for Public Libraries ‎
•         Iranian Society for Library and Information ‎
•         Association of Child and Adult Writers
•         Union of Publishers and Booksellers
•         Ministry of Culture and Islamic Guidance
•         National Library and Archives of Iran
•         Network of bibliophile cities of Iran
‎
Executive Procedures: ‎
After the call, every city forms a special council for the programming and ‎coordination of activities. The members of council may include different ‎state organizations and municipalities as well as representatives of private ‎and civil organizations including active NGOs in cultural and reading ‎affairs, representative of public and private libraries, and some relevant ‎private sectors including bookshops. ‎
The council will prepare special report on the situation of book in the city ‎and will work on plans for development of reading infrastructures and ‎facilities in the city. This gathering of different sectors results on fresh ‎arrangements, agreements, plans and cooperations. ‎
Accordingly, the city designs and documents a comprehensive plan and ‎propose it as their plan for national book capital. All relevant stakeholders ‎including representative of public and state institutions, municipalities ‎and NGOs are required to sign this plan. ‎
The program is scheduled to run in the next year. To ensure the ‎implementation of the program, the City Council must approve it. Some ‎other forms of guarantees are in the form of agreements, contracts, ‎administrative circulars and official reports.‎
The secretariat for national book capital evaluates the profiles of each city ‎in two levels. Then five cities are nominated and from among them a city ‎will be selected as the capital of the book. A few days before Nowruz and ‎the start of the Persian New Year, this designation is announced by the ‎President, Vice-President or any other high-ranking state official. ‎

Characteristics
The program for annual designation of a city as book capital of Iran has a ‎progressive and developmental approach and can coordinate many local ‎infrastructures, facilities, people, events and resources for the promotion ‎of book. The program encourages and empowers both the people and the ‎state to plan and coordinate their efforts for promotion of reading ‎activities at local level. The independent NGOs and local book promotion ‎groups and individuals are finding the urban facilities at their reach for ‎further activities.‎
The secretariat annually publishes new and emerging ideas which is a ‎source of inspiration for the activists across the country.‎
‎Also, the state local authorities find the real capacities of books and ‎reading communities for execution of further social, cultural and ‎developmental projects. ‎
The program has found many other great results that are hard to observe ‎and list, but the active presence of women and young people at every level ‎of planning, organization and implementation of the programs is hard to ‎overlook or ignore.
‎
Achievements ‎
During the past years, independent scholars have conducted a number of ‎field researches and assessments. These annual assessments have shown a ‎considerable increase in reading activities and book-related events. ‎
Another assessment conducted by National Cooperative for Book ‎Distribution, shows a significant increase in demand for more books in ‎the cities that have shown interest in nomination. The increase in more ‎evident in the case of books for children and young adults where it ‎reached to more than 70 percent. ‎
In addition to the evident increase in reading activities, the program also ‎created new opportunities for the presence and activities of women, ‎children and young adults in social activities. ‎
Surveying the reading activities of the four cities that are introduced as ‎book capital shows that most of them have developed sustainable and ‎independent reading promotion programs that evolve through time. ‎
Every year, the secretariat publishes an illustrated and detailed list of ‎selected ideas and activities for promotion of book is published as a new ‎book: Ideas for Book Promotion in Cities. ‎

Social Impacts ‎
The program for selection of a city as Book Capital of Iran has become ‎an attractive program for the media and newspapers. Since the early calls ‎and announcements in late September, the press, different news agencies, ‎as well as radio and TV channels warmly cover the news and events ‎around it. The main reflection, however, happens in local media and local ‎social networks. ‎

Local media including websites, newspapers, as Radio and TV channels ‎regularly and much enthusiasm cover the news and views on the event. ‎Such a warm welcome by the media creates productive waves in the ‎society and increases the level of participation of the people and a variety ‎of governmental and private organizations in the event. ‎