Publish Date : Monday 19 August 2013 - 14:41
The Persian rendition of 'The Israel Lobby and U.S. Foreign Policy' has been unveiled in Tehran, Iran. 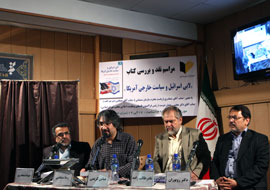 IBNA: Penned by John J. Mearsheimer, the book was unveiled in a ceremony held in Tehran on August 18, 2013, in the presence of cultural and media scholars.

Praising the translation of the book in Parisian, Nader Talebzadeh, recognized Iranian documentary maker and journalist, asserted that the book is like an attractive movie right from the beginning until the end that can play a significant role in raising awareness about the role and nature of Zionist lobbies in the US’s politics and foreign approach.

Reza Montazami and Mehran Nasr have jointly translated the book in Persian.

Talebzadeh stressed the need for raising global awareness on the issue of Zionism, and stated that there is a lot of potential in various artistic fields to exploit the current anti-Zionistic atmosphere in the world to counter their influence.

He further added that there are numerous prominent figures in the world who have voiced readiness to run courses on the field in Iranian universities. Figures like Michael Jones and Kevin Bert, American analyst of Islamic issues, and Jerry D. Mason.

He further called on the government to work out plans and programs to make use of such a golden opportunity to disseminate knowledge about the negative influence of the Zionist lobby in the world.

Elsewhere in his speech, he posited the Islamic Revolution as a fantastic raiser of awareness about Zionist and the realist of the Zionist regime as well as its role in world and regional equations.

“One of the achievements of the Islamic Revolution was that it showed the world the real face of the Zionist regime,” he said. “The Islamic Revolution bestowed a spiritual understanding to the world of the Zionist activities and still continues to do so with Iran being the forerunner of the movement. Designation of the Quds Day by Imam Khomeini was a turning point in this regard and got the world to earnestly consider the issue.”

Later in the ceremony, Hussein Rouivaran, head of the International Union of Youths And Youngsters Against Occupation, said identification of the Zionist lobby is a national duty, and asserted that the Zionist lobby has the greatest influence on US politics and plays an important part in its foreign policy decisions.

“Iran has a challenged relationship with the US and its relation with the Zionist regime is negative,” he went on to add. “Given the fact that the US plays a determining role in the Middle East, understanding the underlying layers of the Zionist lobbies in its politics is a national must.”