The Tripartite Network for Reading Promotion in Iran 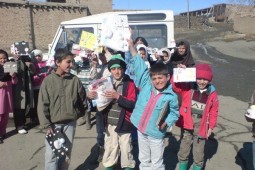 Organizing programs for reading promotion and establishing related ‎events – such as Reading Mondays at kindergartens and pre-school ‎centers, Cup of Reading Clubs for Children and Young Adults, Festival for ‎Appreciating Reading Promotors and Clubs, Designation of Iranian Book ‎Capital and Festival for Bibliophile Villages of Iran with its sepecial ‎feature helping reading to flourish – are all invaluable activities for book ‎promotion in Iran.

But regarding an Iranian social charactersitic, being a ‎‎‘short-term society’ as some historical sociologists call it, the continuity of ‎these events necesaites institutionalization and changing such a movement ‎into a public demand by forming public groups for reading promotion ‎and paving the way for their participation and presence in public policy ‎makings.
‎
Office of Cities and Villages Coordination

Reading Promotion Groups Network
This network is made of volunteer and public reading groups, who while ‎independently working, share their experiences, know about other ‎groups, decide together on their common problems, seek one another’s ‎opinion on new ideas, and have the chance of influencing the related ‎public policies.‎

This network consists of 20 public groups and its coordinating council is ‎formed through an election.‎
Its representative is also a member of the Council of Cities and Villages ‎Coordination. ‎

This network helps in running reading promotional events including Cup ‎of Reading Clubs for Children and Young Adults, and was allowed in the ‎preceding round to run the Festival for Appreciating Reading Promotors ‎and Clubs ever after.‎

Bibliophile Cities Network
It is a communicational and coordinating institute that is active in ‎exchanging common experiences and activities among cities that have ‎ever been nominees for Iranian Book Capital.‎ This institute is made of those cities’ cultural managers and mayors, and ‎its coordinating council is elected by them.‎

Currently, over 20 city-nominees for Book Capital City are among its ‎members, which is increasing every year.‎

This network’s secretariat is located in the Book Capital city and its ‎coordinating council holds its meetings every month in different cities ‎across the country. For the time being, the mayor of the city of Yazd is the ‎head of its coordinating council. It has held four meetings so far in this ‎year, and one of its future programs will be holding a seminar for mayors ‎from all provincial centers of the country, with ‘reading promotion’ as its ‎topic.
‎
This network has also attained a good relation with the High Council of ‎the Provinces, one of legislative institutions in cities to which city and ‎village council representatives enter through election.‎

Bibliophile Villages Network
Villagers’ participation in policy makings is not only a new trend in ‎reading promotion process but that it is regarded as a big step from a ‎political and social point of view.‎

It was formed in the presence of the village chiefs, head of village councils, ‎and village librarians from 40 villages and in four rounds. The members of ‎its coordinating council were elected by the same attendants.‎

This network was established in March this year by the election of its ‎coordinating council in Tehran, and got formally recognized through a ‎ceremony at Tehran International Book Fair (TIBF).‎