National Library Relates with the world

Publish Date : Thursday 12 November 2009 - 12:52
Manager of the Iranology section of the National Library stated that the theses section of the library is so rich that it is ready to set up contacts with other libraries in the world. 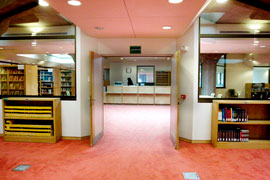 IBNA: As Iraj Enayati said, so far the Iranology section of the library has begun contacts with such libraries as those in Germany and Netherlands.

He noted that there are already some 3,000 theses in the section and said "more than 80% of the theses are written in English and the rest are in French, Turkish and other languages."

He said none of the theses are in Persian in the Iranology section and collecting theses from other libraries in the world would require time and finance.

He said the experts in the section are presently pursuing contacts with other libraries of the world. "There are, however, problems in the way of the contacts which should be solved," he added.

He further mentioned the Iranology summits of the library and stated that one of the issues raised by the management of the section is launching an exposition to introduce book on the sidelines of the summits.