Serbian translation of 'The Stories of Majid' unveiled ‎ 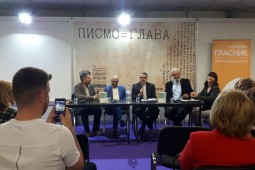 According to IBNA correspondent coaching from the public relations office of Iran's Cultural Fairs Institute (ICFI) the ceremony was held jointly by ICFI and Iran's Cultural Attaché to Serbia with Moradi Kermani and the Serbian translator of the young adults book 'The Stories of Majid' (1985) in attendance. The work has been published by work has been released by the Službeni Glasnik Publishing in Belgrade.

Moradi Kermani said at the ceremony: "Majid was created 45 years ago when I was 30 and is getting old with me. 38 stories of Majid have been published as book. The stories have also been translated into 12 languages.”

‘The Stories of Majid’ was a script which was adapted into a book and published. The main character, Majid, is an orphan who lives with his grandmother in the city of Kerman, Iran.

The book details the adventures, misadventures, and coming-of-age milestones from the perspective of this Iranian teenager attending the first year of high school. Majid works in a bakery during the summer and sometimes after school in order to supplement the money that his grandmother receives from her deceased husband's retirement funds.