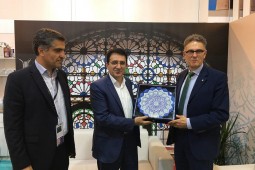 According to IBNA correspondent, quoting from the public relations office of Iran's Cultural Fairs Institute, Oliver Zille, Director of Leipzig Book Fair said during his visit to Iran's stand at 2019 Frankfurt book fair that all who have attended Tehran International Book Fair have good memories of that event.

Inviting our country to the upcoming Leipzig book fair which is scheduled for Mach 12-15, 2020, he expressed enthusiasm for participation at Tehran international Book Fair.

Director of Iran's national stand at Frankfurt Book Fair Ghader Ashna for his part invited the director of Leipzig Book Fair for the upcoming Tehran International Book Fair and expressed hope for cooperation including exchange of stands and sharing experiences of managing book events between the two fairs.

The Leipzig Book Fair (German: Leipziger Buchmesse) is the second largest book fair in Germany after the Frankfurt Book Fair. The fair takes place annually over four days at the Leipzig Trade Fairground in the northern part of Leipzig, Saxony. It is the first large trade meeting of the year and as such it plays an important role in the market and is often where new publications are first presented.