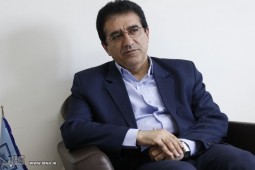 Ghader Ashna
According to IBNA correspondent quoting from the public relations of Iran’s Cultural Fairs Institute (ICFI), Ghader Ashna, CEO of ICFI who is also the Director of Iran’s national stand at the 71st Frankfurt Book Fair said that the stand which has drawn on Iranian traditional and Islamic signs and symbols will measure to 190 square meter.

“20 publishers, two literary agencies, 6 publication unions, Iran’s Cultural Attaché to Berlin, Iran’s Embassy in Budapest, Secretariat of the Grant Plan of Iran’s Ministry of Culture and Islamic Guidance which aims to promote the translation and publication of Persian books into other languages will be active during the 2019 FBF,” he said.

“1494 titles of books in various fields of Iranian studies, contemporary and classic Persian literature, arts, Islamic studies, books for children and young adults, academic, Islamic revolution, religion and the Sacred Defense will be put on public display in the event.”

“As well as books, brochures have been produced which introduce Tehran International Book Fair (TIBF), Iran’s Cultural Fairs Institute, Iranian publishers and participants in the event and a catalog which introduces the methods of cooperation with the Grant Plan of Iran’s Ministry of Culture and Islamic Guidance to foreign publishers. The catalog has been published in 12 languages, Arabic, Chinese, Urdu, English, French, German, Italian, Korean, Russian, Serbian and Turkish,” Ashna stated.

“The other measures in this regard are introducing Iran’s Book of the Year World Award,  14 Iranian books which have been translated into Turkish through the Grant Plan of Iran’s Ministry of Culture and Islamic Guidance,” he added.

FBF is the world's most important marketplace for print and digital content. It’s also an extraordinary social and cultural event. Every October, publishing experts, writers, creative professionals and fans come from all over the world to network, hold discussions, negotiate, take decisions, be amazed and celebrate.

It’s when Frankfurt becomes the focus of the world’s media and publishing industries- putting the most important innovative technologies and world literature at their fingertips. And this year's Guest of Honour Norway presents its literary tradition with many highlights to look forward to.