Publish Date : Tuesday 1 October 2019 - 16:43
IBNA- The 5th Istanbul Arabic Book Fair Kicked off on September 28 with the slogan ‎‎"Book will Unite Us" as Iran is participating in this event for the first time.‎ 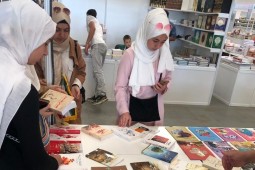 According to IBNA correspondent, quoting from the public relations office of Iran's Cultural Fairs Institute (ICFI), the opening ceremony of the 5th Istanbul Arabic Book Fair was held with a number of Turkish officials in attendance.

More than 200 publishers from 15 countries will participate in the fair including those from Iran, Turkey, Egypt, Lebanon, Saudi Arabia, Qatar, Syria and other countries

The directors of the fair expect 100,000 visitors as the earlier edition of the event which was held in the same place, Yenikapı quarter hosted 63,000 visitors.

The fair was organized at the Eurasia Show and Art Center with the contribution of the Turkish Press and Publishers Copyright & Licensing Society (TBYM) and the International Arabic Book Publishers Foundation.

Iran's Cultural Fairs Institute is displaying over 330 titles of books in Arabic on a variety of subjects released by different Iranian publishers in the 5th Istanbul Arabic Book Fair.

Yasin Aktay, Cultural advisor of Turkish president Recep Tayyip Erdoğan and some other Turkish officials visited Iran's stand on the first day of the book fair which will run by October 6.