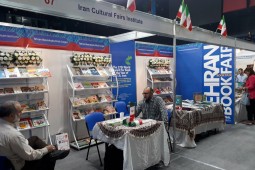 According to IBNA correspondent, quoting from the public relations office of Iran’s Cultural Fairs Institute, the event is held in a gymnasium hall in the center of Baku with simply 92 stands.

Twelve countries including Iran, India, France, Italy, Egypt, Russia, Turkey, Kazakhstan, the United States and Syria directly or as the publishers’ representatives have participated in the book fair.

As a biennial event, Baku Book Fair is attended by publishers from Azerbaijan Republic booksellers, multifunctional institutes, literary agencies as well as Institute engaged in book distribution and marketing.

It's the second time that Iran’s Cultural Fairs Institute is participating in Baku Book Fair. Our country’s stand is displaying 370 titles of books in various fields of Iranian studies, Persian language teaching, books for children and young adults, literature and art.

Among the tasks which are being accomplished by the Iranian representatives are inviting the officials of Baku Book Fair to participate at the upcoming Tehran International Book Fair (TIBF), introducing the capacities of Iranian publishing industry, introducing the plans of Iran's Ministry of Culture and Islamic Guidance for supporting the translation and publication of Persian books into other languages such as the Grant Plan.