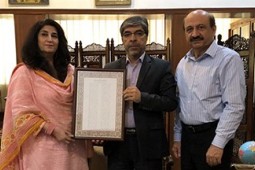 Mrs. Fuziah, The granddaughter of renowned Pakistani author and poet Ghulam Mustafa Tabassum referred to Permanent cultural ties between the two countries of Pakistan and Iran saying that the academy is planning to hold various programs and ceremonies such as poetry nights, establishing literary circles and so on at Iran's Culture House in Lahore.

Rezaei-Fard for his part said that Iran's Culture House in Lahore has always tried to introduce Iranian culture and art and strengthen ties with the brother country Pakistan.

He added that the culture house has held Several programs on arts and literature In cooperation with Pakistani centers and organizations in Lahore and is ready to follow and increase such programs.