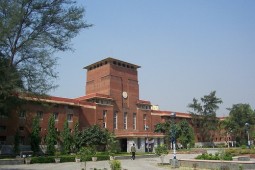 According to IBNA correspondent quoting from the public relations department of Islamic Culture and Relations Organization, Iran’s Deputy of Cultural Attaché to New Delhi Ali-Reza Qazveh and Head of the Persian Language Center in New Delhi Ehsan Shokrollahi visited the University of Delhi and held a meeting with Rajender Kumar (PHD) who requested for new Iranian books of literary criticism, novel and poetry to enrich the Persian Department of the University.

Regarding the importance of boosting cultural ties between Iran and India, he also welcomed hosting conferences and cultural dialogues between the two countries in his country for the upcoming year.

The University of Delhi, informally known as Delhi University (DU), is a collegiate public central university, located in New Delhi, India which was founded in 1922. The university has since become India's largest institution of higher learning and among the largest in the world. It currently consists of 16 faculties and 86 departments distributed across its North and South campuses.