Persian language to be taught at Farabi Eurasia Center 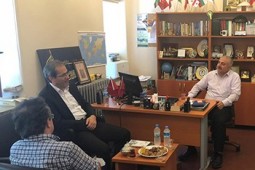 According to IBNA correspondent, quoting from the public relations department of Islamic Culture and Relations Organization (ICRO), Kourosh Moghtaderi, Iran’s Cultural Attaché to Turkey visited Farabi Eurasia Center of Research affiliated to Istanbul University and discussed with the director of the center Abdullah Qizilchik about boosting cultural and literary ties between Iran and Turkey.

Referring to the abundance of books and articles on literature, humanities and Islamic sciences in Persian, Moghtaderi said that in recent years, Turkish language translators and publishers have shown more interest in publishing such works.

He further introduced two Iranian plans, top and Grant which aim to encourage the translation of Persian books into other languages including Turkish.

Following the session the two officials discussed other issues such as the allocation of a department in the library of Farabi Eurasia Center of Research to books translated from Persian into Turkish, a tribute to the Professors of Persian language as well as top translators of Persian to Turkish.

Farabi Eurasia Center of Research affiliated to Istanbul University was established in December 2016 and is active in holding scholarly seminars and educational courses.