Publish Date : Sunday 14 July 2019 - 17:51
IBNA- The special issue, No 460 of French monthly magazine ‘L’ Histoire’ (The History) ‎is centered on the history of Iran during the Achaemenids Empire under the title “The ‎Persian King of Kings”.‎ 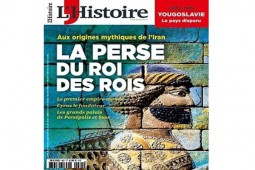 According to IBNA correspondent, quoting from Iran’s Cultural Attaché to France, the monthly magazine is among those journals established by academicians and scholars at the research centers of historical studies in France. It was launched in 1978.

The motto of the editorial of ‘L’ Histoire’ is “explaining and interpreting science for all”. Their general approach is based on general presentation and analysis of historical subjects for ordinary readers and the interpretation of history to look at the developments in contemporary times.

The Achaemenid Empire (c. 550–330 BC), also called the First Persian Empire was an ancient Iranian empire based in Western Asia founded by Cyrus the Great. Ranging at its greatest extent from the Balkans and Eastern Europe proper in the west to the Indus Valley in the east, it was larger than any previous empire in history, spanning 8 million square kilometers.

Incorporating various peoples of different origins and faiths, it is notable for its successful model of a centralised, bureaucratic administration (through satraps under the King of Kings), for building infrastructure such as road systems and a postal system, the use of an official language across its territories, and the development of civil services and a large professional army. The empire's successes inspired similar systems in later empires.

The special issue No. 460 (June 2019) takes an analytical consideration of that significant era of the Iranian ancient history and its legacy for contemporary times. It consists of seven articles published in 26 pages.