Publish Date : Thursday 11 July 2019 - 16:31
IBNA- A novel about the slipperiness of truth and the price of friendships, ‘The Lying ‎Game’ by British psychological crime thriller writer Ruth Ware has been translated into ‎Persian and released.‎ 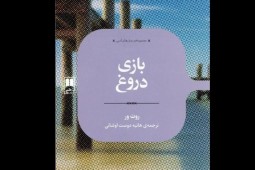 According to IBNA correspondent quoting from the public relations office of Elmi Publishing in Tehran, the book by bestselling author Ruth Ware has been translated by Haniyeh Doust Ushani in 350 pages.

Synopsis of ‘The Lying Game’ reads: “Isa Wilde knows something terrible has happened when she receives this text from an old friend. Why else would Kate summon her and their two friends Thea and Fatima to the seaside town where they briefly attended school together seventeen years ago?

The four friends first met at Salten House boarding school, where they quickly bonded over The Lying Game, a risky contest that involved tricking fellow boarders and faculty with their lies.

But the game had consequences, and the girls were eventually expelled after Kate’s dad, their beloved art teacher, mysteriously disappeared. Forever bound by their lies but needing to forget their past, they went their separate ways—Kate remaining in Salten while the other three left to start new lives in and around London.

Now reunited, Isa, Kate, Thea, and Fatima discover that their past lies had far-reaching effects and criminal implications that threaten them all. In order to protect their reputations, and their friendship, they must uncover the truth about what really happened all those years ago.”