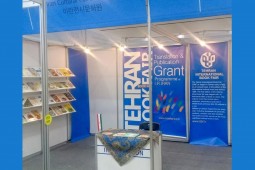 According to IBNA correspondent, quoting from the public relations office of Iran's Cultural Fairs Institute, the opening ceremony of 2019 Seoul International Book Fair (SIBF) was held on Wednesday South Korean Minister of Culture, Sport and Tourism, Do Jong-hwan,‎ Head of South Korean Association of publishers as well as several local and international book activists.

It’s the second consecutive year that Iran participates in this event based on a memorandum of understanding with South Korea to exchange free stands. The stand of our country at 2019 Seoul International Book Fair measures to 18 square meters displaying books on a variety of subjects such as Iranian studies, children and young adults, art and contemporary Iranian literature.

Hungary is the guest of honor in this edition of SIBF and the recipients of the Prix Voltaire will attend the event. Established by the International Publishers Association in 2005, this award is presented to people or organizations that displays exemplary courage in upholding the freedom to publish.

This year’s winner will be announced at SIBF. Moreover, recipients of the Golden Pen of Freedom Award, which recognizes the outstanding efforts of journalists to protect the freedom of speech, will also be in attendance to talk about their experiences.

ICFI is scheduled to attend at the international conferences in the fair and the experts of the institute will deliver lecture on Iranian publishing industry. Introducing “the Grant Plan” aimed to promote the translation of Persian books into other languages are among other programs of Iran in this event.