Publish Date : Sunday 12 May 2019 - 18:11
IBNA- At the 33rd Turin International Book Fair director of the event Silvio Viale met ‎CEO of Iran’s Cultural Fairs ‎Institute Ghader Ashna and they stressed on the boosting ‎cultural ties between Italy and Iran.‎ 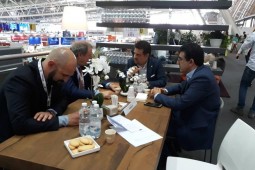 According to IBNA correspondent quoting from the public relations office of Iran’s Cultural Fairs ‎Institute (ICFI), in this meeting, Ashna introduced Tehran International Book Fair (TIBF) as the major book event in the Middle East.

He referred to the participation of Italy as the guest of honor in the 30th TIBF in 2017 which was a notable accomplishment. Ashna also invited Silvio Viale to attend the 34th TIBF scheduled for 2020.

The Turin International Book Fair (Italian: Salone Internazionale del Libro) which was inaugurated in 1988 is Italy's largest trade fair for books and second in Europe only after Frankfurt Book Fair, held annually in mid-May in Turin, Italy.

From October 2016, the director of the is the Italian writer Nicola Lagioia, also the winner of the Strega Prize in 2015 with the novel ‘La ferocia’ (The Ferocity).

The stand of Iran’s Cultural Fairs Institute (ICFI) in this event is in an area of 16 square meters displaying books on a variety of subjects including Persian language teaching, Iranology, tourism, books for children and young adults as well as Persian books translated into other languages such as Italian.

The 33rd Turin International Book Fair is featuring over 1'200 exhibitors, 2'000 authors and guests, 1'400 events. 170'786 visitors are expected for the event. The guest of honor of this year’s fair is the Emirate of Sharjah. The event kicked off on May 9 and will run by May 13.