Publish Date : Monday 22 April 2019 - 17:56
IBNA- Deputy Director of the 32nd Tehran International Book Fair TIBF met a ‎delegation from China as the guest of honor in the event today stressing on boosting ‎cultural ties between Iran and China.‎ 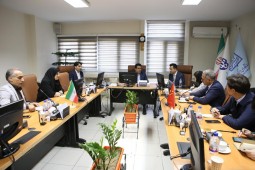 At the beginning, Ashna said: “Iran and China are two nations with great civilizations and histories and the relations between them should be expanded.”

Ashna who is also the CEO of Iran’s Cultural Fairs Institute (ICFI) added: “China is playing a key role on the scene of world politics and has always sided with Islamic Republic of Iran. We are interested to strengthen cultural ties between the two countries. Participation of China at the 32nd Tehran International Book Fair will undoubtedly be a landmark in achieving such a goal. We hope to pave the way for a better communication between the literati and publishers of the two countries.”

Deputy Director General of Advertisement of National China Company of Print Export and Import said for his part: “We are also interested to improve culture and book reading as it is followed by China as a policy. With respect for all countries, we are implementing this plan and we eye to more cultural interaction.”

“It’s the first time that we have participated in another country with this amount of books and book activists. Over 500,000 titles of books are annually published in China. We have attended the 32nd Tehran International Book Fair with a delegation of 200 members among them 94 publishers will also attend. We regard this opportunity as a turning point in expanding cultural relations with Iran,” he added.