Diaries of celebrated actor to be published ‎ 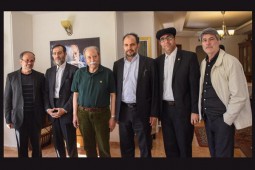 Ali Nasirian, third from left
According to IBNA correspondent quoting from Iran’s Academy of Arts, a meeting for discussing about the proposal was held with Ali Nasirian, Ali-Reza Esmaeli, Director of the Academy Ali Montezari, Head of the drama department of the academy and some other directors of the entity in attendance.

At the meeting, Nasirian elaborated on the history of Iranian contemporary theatre and the importance of writing plays which should be taken seriously by the officials. He also expressed his willingness to convey his experiences in the field of Iranian drama to the new generation of the country.

Esmaeli for his part welcomed the suggestions made by the veteran actor and proposed that workshops to be held on Iranian dramas in the Academy of Arts.

The book featuring diaries of Ali Nasirian has been edited by Muhammad Ali mansoori. The work gives details about the life and work of the noted Iranian actor.