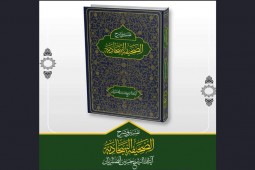 According to IBNA correspondent, quoting from the public relations department of Dar ul-Erfan Science and Culture Institute, director of the Institute Hojjat ul-Eslam Mohammed Javad Saberian said that in respect to the need for a better understanding of Imam Sajjad ideas particularly by Arab language Muslims from one hand, and the specific preoccupation of Ayatollah Ansarian, this book published on the felicitous occasion of Imam sajjad (AS) birth anniversary.

‘Al-Sahifa al-Sajjadiyya’ (Scripture of Sajjad) is regarded as the oldest prayer manual in Islamic sources and one of the most seminal works of Islamic spirituality of the early period. Shia tradition considers this book with great respect, ranking it behind the Quran and Imam Ali’s Nahj al-Balagha. This prayer book deals with Islamic spirituality and provides teachings on levels from the theological to the social.

The book has been translated into Arabic by seyyad Abbas Mousavi Kamal Al-Seyyad in 12 volumes and 6 series released by Dar ul- Erfan Science and Culture Institute.