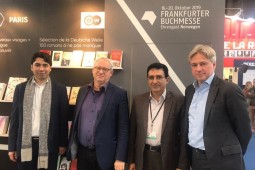 According to IBNA and correspondent, quoting from the public relations office of Iran’s Cultural Fairs Institute (ICFI), on the first day of the 39th Paris Book Fair, Qader Ashna, CEO of ICFI, Ahmad Shakeri, director of international section of the 32nd TIBF and Jamal Kamyab, Iran’s Cultural Attaché to Paris met with Juergen Boos, President of Frankfurt Book Fair and Tobias Voss, Vice President of the fair.

At the meeting, they reviewed their mutual activities at FBF and TIBF. Referring to the active participation of Iranian publishers at the latest edition of Frankfurt Book Fair, Juergen Boos hoped that this trend will be continued in future.

Following the session, Ashna officially invited Boos to visit the 32nd Tehran International Book Fair scheduled for April 24 to May 4. Boos for his part welcomed the invitation saying that FBF will have an active participation in Tehran event and requested for holding joint workshops by Iran and Germany.

The Iranian delegation also held meetings with Italian and Omani delegations on the first day of Paris Book Fair which field run by March 18.