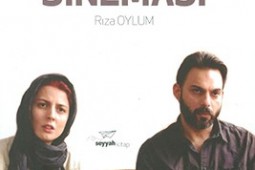 According to IBNA correspondent, quoting from the public relations department of Islamic Culture and Relations Organization, Oylum had a meeting with Iran’s Cultural Attaché to Turkey Kourosh Moqtaderi and discussed about his book.

“I have tried to provide information on the history of the Iranian Cinema, concepts in Iranian Cinema, the relation between literature and cinema in Iran, the Iranian Sacred Defense cinema, prominent Iranian films and directors as well as film festivals held in Iran,” Oylum said at the meeting.

Moqtaderi for his part referred to the status of Iranian Cinema in Turkey and appreciated the efforts made by Turkish film expert in authoring a book which introduces the cinema of our country to the audience in Turkey.

Oylum has already authored books on the cinema of the Middle East, German cinema, Russian cinema and East Asian cinema.

The book which has been published in 160 pages was unveiled at a ceremony held at the Yapi Kredi Culture and Arts Complex in Istanbul yesterday.