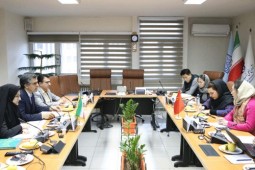 According to IBNA correspondent, quoting from the public relations office of Iran's Cultural Fairs Institute (ICFI), the meeting was attended by the CEO of ICFI Ghader Ashna, director of the foreign fairs at the institute Gholam-Reza No’ei as well as the representatives of China’s Company of Print Export and Import.

Addressing the Chinese delegation at that meeting, Ashna said: “China and Iran both have ancient civilizations, so, we are pleased to host China at the guest of honor in the 32nd Tehran International Book Fair and welcome the representatives of your country.”

“We will make our best efforts to implement your plans at the book fair. ICFI has also programs to hold joint workshops to be attended by the writers and illustrators of both countries and a variety of cultural programs on the sidelines of the book for the book fair which would develop cultural activities between the two countries,” CEO of Iran's Cultural Fairs Institute added.

Following the session, Gholam-Reza No’ei responded to the question of the Chinese delegation about preparation for participating at the 32nd TIBF, timetables, the area where will be allocated to them, deadline for sending cargos including books.

The result of the discussions was that it Chinese delegation will include writers, illustrators, University instructors and 50 publishers from that country who will attend the 32nd Tehran International Book Fair.