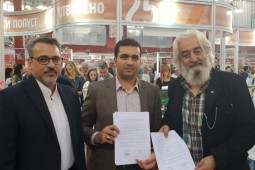 According to IBNA correspondent quoting from the public relations office of Iran’s Cultural Fairs Institute (ICFI), the memorandum of understanding was signed at the 63rd International Belgrade Book Fair by the representative of ICFI, Hossein-Ali Sabzeh and Petar Arbotina, Director of publication department of Slojebni Glasnik while Iran’s Cultural Attaché in Serbia, Mahdi Shirazi also attended the meeting.

The MoU features cooperation and exchange of information between the publishers of the two countries with considering legal and international laws as well as improving bilateral cooperation for the translation of Persian books into Serbian and vice versa.

Based on the agreement, 10 Iranian works would be translated into Serbian within the framework of the Grant Plan initiated by Iran’s Ministry of Culture and Islamic Guidance to support the translation of Persian works into foreign languages.

Referring to the richness of Iranian culture, Director of publication department of Slojebni Glasnik said: “The MoU aims to boost cultural relations between Iran and Serbia, particularly it is meant to introduce Iranian culture and the publishing industry better to our country. Serbian people are rather interested to Iranian and Eastern literature than the literature of the West.”

The director pointed to direct translation from Persian to Serbian and added: “It is the best method for our purpose and I hope that we would be able to translate the best works of Iranian literature into Serbian within the framework of this agreement.

Selected as the best Serbian publisher at the 63rd Belgrade International Book Fair, Slojebni Glasnik was launched and began its activities in 1813 with the publication of the ‘Newspaper of the Serbia’. The day of the company’s foundation is August 13, and in 2018 it celebrated 205 years of publishing official gazettes.

Starting from its core business - the publication of the “RS Official Gazette”- the company has developed into one of the most important publishing houses. The concept of publishing capital editions, professional, theoretical literature and publications gathered around the Glasnik's clearly structured libraries of eminent editors, authors, faculty and other institutions.

Slojebni Glasnik ‎has also won the “Publisher of the Year” Award in 2006, 2007 and 2015 at Belgrade International Book Fair, as well as many other awards in the field of publishing, design, graphics and technical preparations for the press.