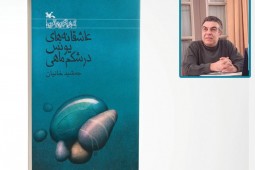 According to IBNA correspondent quoting from Iran’s Center for Intellectual Development of Children and Young Adults, Khanian who is also a playwright, is the first Iranian writer attending the White Raven Biennial which had invited 12 writers of books for children and young adults to participate at this literary event held in June.

At a ceremony in this event, pieces of the novel ‘Yunes Book of Love in Whale’s Stomach’ written by Khanian and the attendees asked questions about the characters of Sara and Yunes in the novel. The book has been published by the Center for Intellectual Development of Children and Young Adults.

Following the session, the program White Sofa was held where the other Iranian Ro’ya Maktabi spoke with Kahanian about his works.

In another occasion, Kahanian visited some schools in Bavaria province and answer the questions raised by the students there.

Born in 1961 in Abaden city in Iran, Kahanian began writing in 1980s by writing stories for adults then he changed it his course to children and young adults literature he has written stories such as ‘The Beautiful Heart of Babur’, ‘The Shark’, ‘Nahi', ‘Deep Dive’ and so on which have been published by the center for the intellectual development of children and young adults.