Hindis to read ghazals of Rumi

Publish Date : Friday 20 July 2018 - 21:19
IBNA- For the first time, 100 ghazals by Mowlana Jalal al-Din Rumi has been translated ‎from Persian into English and published for Hindi enthusiasts of the legendary Iranian ‎poet and Sufi mystic.‎ 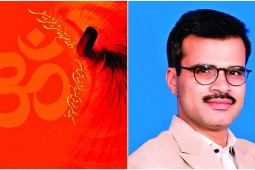 According to IBNA correspondent quoting from DNA India, a Delhi University professor has translated 100 of his unknown ghazals to the Hindi language. This will be the first time when such a volume of Rumi's work will be translated to Hindi directly from Persian. The translation available as of now is mostly done from English versions of the poet's work.

According to Balram Shukla Ph.D., who teaches Sanskrit at the University and has a masters degree in Persian, he has been working on this project for the past six years. "Rumi is not a just a poet, he is a magician. I read him while pursuing masters in the Persian language and literature. I was mesmerised by the beauty of his writing. I wanted to make his work accessible for our Hindi readers. So, I decided to translate some of his finest ghazals in Hindi. It turned out to be a delightful journey," he said.

The book, Nihshabd Noopur, which is divided into three parts, Baab-e-talab (spiritual yearning), Baab-e-tarab (divine ecstasy) and Baab-e-visaal (union), will hit the stands in August with the help of Mahatma Gandhi Antarrashtriya Hindi Vishwavidyalaya, Maharashtra. "Even though I have tried my best to match the Persian rhythm while translating these ghazals, it still can not match the elegance of Persian language," Shukla said.

The publication of Shukla's work has been sponsored by the Iran government under its ambitions "Translation of Persian" (ToP) project. "The Iran government is very keen on the cultural exchange by making our literature accessible to the people of other countries. We are currently supporting many such works globally under our ToP scheme, wherein we encourage the translation of Persian literature in other languages. And, this work is unique as it has been done directly from Persian," said Ali Dehghani, cultural counselor at Iran Culture House in the national Capital.

The Head of Department (HoD) at DU's department of Persian, Aleem Ashraf Khan (Ph.D.) said that the work will help to make Rumi's work more "reachable" in India. "A large section of our population consists of Hindi reader and they are presently deprived of Rumi's work. Not everyone can read English. It will help more people to read and know about the eternal poet," he said.