Iranian novel to be published in Italy

Publish Date : Tuesday 25 April 2017 - 22:17
IBNA– The novel ‘Journey to 270 Degrees’ by Iranian writer Ahmad Dehqan is scheduled to be translated and published in Italy next year. 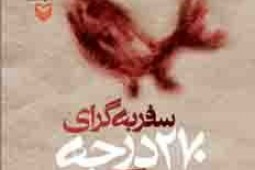 According to IBNA correspondent quoting from the public relations office of Neyestan Publications in Tehran, the contract to publish this book was signed between Ahmad Dehqan and Mimesis International Publications in Italy a while ago.
Based on the agreement, the translation of the book ‘Journey to 270 Degrees’ will be published on the occasion of the thirtieth anniversary of the end of the war Iraq imposed on Iran, known in our country as “Sacred Defence”.
Negotiations between the author and the translator of the book were carried out in April and the translation is expected to be concluded early in fall.
Literature and linguistics graduate of the University of Milan, Michele Marly, has studied Persian language at Dehkhoda Institute of Tehran University. He is currently studying as a graduate student at Ca' Foscari University of Venice, in Italy. Marley has published numerous articles in Italy on the Middle East and Iran to date.
The book ‘Journey to 270 Degrees’ has already been published, translated into English by Paul Sprachman  and into Russian by Alexander Andrioshkin. The novel has got the ‘Unknown Land’ award as the best Eastern story in Russia. The prize is awarded to works that have a high level of creativity, scientific and cultural level and show adherence to humanitarian principles.