Publish Date : Saturday 28 January 2017 - 23:48
IBNA- The book, ‘The Friend’s Companion’ featuring oral history of the late Iranian Commander-in-Chief and Minister of Defense during the Imposed War, Major General Mohammad Salimi will be unveiled in the Museum-Garden of Sacred Defense. 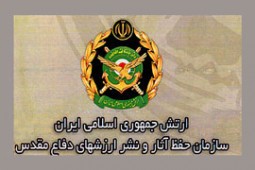 According to IBNA correspondent quoting from the Organization for Preserving the Works and Values of Iranian Army during the Sacred Defense, ‘The Friend’s Companion’ authored by the head of this organization General Ebrahim Golfam, and Ghasem Akbari Moghaddam.

The unveiling ceremony is aimed to pay tribute to the late Iranian Commander-in-Chief Major General Mohammad Salimi. The event which is scheduled for Sunday, January 29 at the Museum-Garden of Sacred Defense in Tehran will be attended by Iran’s military and governmental officials as well as the family of the late commander.