Publish Date : Sunday 6 November 2016 - 23:59
IBNA – In the opening ceremony of the 22nd Iranian Press Exhibition, Culture Minister Reza Salehi Amiri referred to the importance of media, saying that they are guiding lights leading to development and progress of the society. 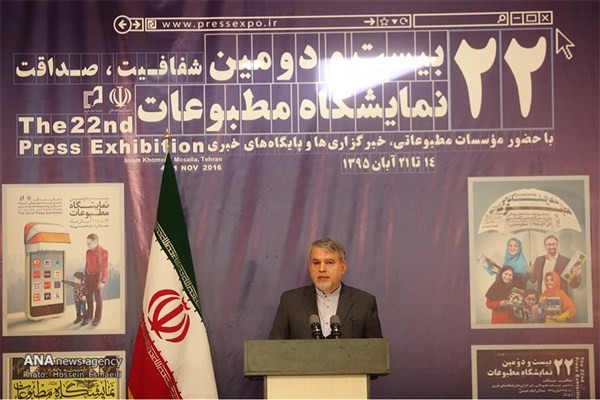 According to IBNA correspondent, the 22nd Press Exhibition was formally opened on November 5with the slogan “Transparency, Honesty’ and was attended by President Hassan Rouhani (PhD) at the Mosalla of Imam Khomeini.
In this event, the Minister of Culture and Islamic Guidance, Seyyed Reza Salehi Amiri, stated: “It is a precious moment today to see the educated, empathetic and sincere group of the media activists are hosting the President. I thank the President for his presence on your behalf, because this presence shows the great importance he sees in this issue.”
“No need to say that the press and the media are bright lights for the achievement of development and progress, and the brighter the light, the faster the movement,” he stated.
“This exhibition is a place for cultural dialogues between the elites, managers and directors of the media to have a better understanding of each other and to work together toward a greater share of participation, he continued,” Salehi Amiri added.