German translation of the Persian book unveiled at FBF

Publish Date : Sunday 23 October 2016 - 23:59
IBNA- At the 68th Frankfurt Book Fair (FBF), the German translation of the Persian book ‘The Legend of the King and Mathematician’ published by Sham’ va Meh Publications in Iran was unveiled in a ceremony. 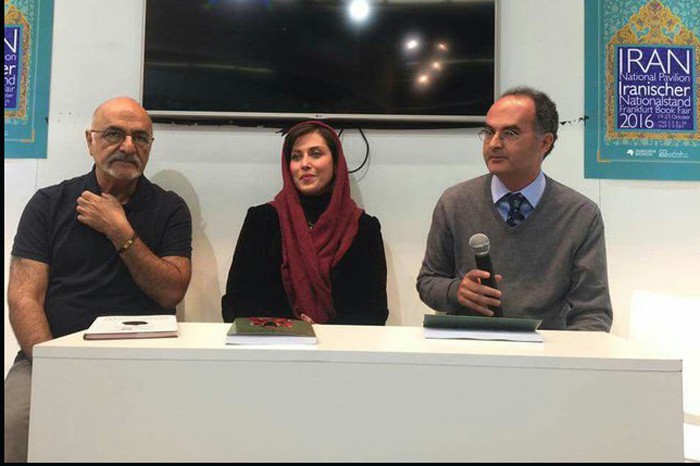 Hosseini-Zad, Keramati and Shahneh Tabar
According to IBNA correspondent, this ceremony was held on the second day of the 68th Frankfurt Book Fair with the Iranian cinema and TV actress Mahtab Keramati who is the UNICEF National Ambassador in Iran; the Iranian translator of German literature Mahmoud Hosseini-Zad; and director of Sham’ va Meh (Candle and Fog in English) Publications Afshin Shahneh Tabar in attendance.
In her speech, Keramati praised the difficult task of adapting a complicated scientific book in a dramatic work which was accomplished in ‘The Legend of the King and Mathematician’ by the Iranian playwright and director Naghmeh Samini.
The veteran translator Hosseini-Zad said at this ceremony: “Taking consideration of the good taste of people in targeted countries is very important for translating works from Persian language to other languages.”
Shahneh Tabar in his part pointed to the five years of efforts made in  translating this work from Persian to German in collaboration with Germany’s House of Mathematics saying that ‘The Legend of the King and Mathematician’ has been registered by UNESCO.