Quran offers remedies for the maladies of human society 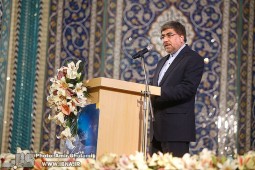 According to IBNA correspondent, the opening ceremony of the 24th International Quran Exhibition was held on Monday night, June 13, 2016, in the presence of Ali Jannati, Minister of Culture and Islamic Guidance, Hojatoleslam Mohammad Reza Heshmati, Deputy of the Quran and progeny of the Minister of Culture and Islamic Guidance, and a group of cultural figures and Quran lovers at Imam Khomeini’s great Mossala in Tehran.
At the ceremony, Jannati said: “Quran is the eternal miracle of Islam and the only credible holy book. It was sent from the world unseen to the material world in the holy month of Ramadan and has given dignity and greatness to this month. This is the most precious heavenly gift bestowed on mankind through the greatest man ever, to direct them.”
The Minister of Culture and Islamic Guidance further added: “The Holy Quran is a boundless ocean of knowledge beyond man’s understanding. In the words of Imam Khomeini, the great sage, Quran is the manifestation of God’s nature and it is impossible to understand the depth of it.”