Publish Date : Monday 30 May 2016 - 23:58
IBNA- In a meeting with the Bangladeshi Ambassador to Tehran Majibur Rahman Bhuiyan, Iran’s Culture Minister Ali Jannati stressed on the need for cooperation with that country in the field of book translation. 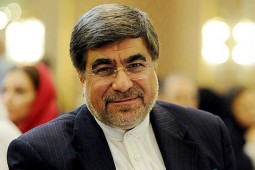 Iran’s Culture Minister Ali Jannati
According to IBNA correspondent, quoting the Public Relations Department of the Ministry of Culture and Islamic Guidance, Ali Jannati met Rahman Bhuiyan, the Ambassador of Bangladesh in Tehran on May 29 and said: “”Due to cultural commonalities, Iran and Bangladesh have had good relations since the ancient times.”
Referring to the signing of a cultural exchange program agreement between Iran and Bangladesh last year, he added: “It’s necessary to bring about a new momentum in cultural relations between the two countries.”
The Minister of Culture and Islamic Guidance further remarked: “Iran has established a good relationship with the cultural and academic centers of that country through our cultural advisors since the old times, and the need for the development of these relationships is more felt now than ever before.”
Jannati emphasized on the role of ambassadors in strengthening relationships between the countries and said the ambassadors can play a very effective role in the expansion of relations in the fields of economy, politics and culture between the countries, as well as in other areas.
Pointing to the verse “… of this Persian sweet that goes to Bangaleh”, he added: “Considering the number of Iranians living in Bangladesh, Iran is also interested in learning the Bangali language, and the cultural commonalities between the two countries require us to become more familiar with each other’s language.”