Anti-war approach is a feature of Sacred Defense literature 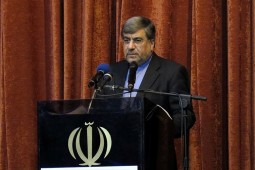 According to IBNA correspondent  quoting from the Public Relations and Information Department of the Ministry of Culture and Islamic Guidance, in the commemoration ceremony of the Sacred Defense Week, Ali Jannati, Minister of Culture and Islamic Guidance expressed condolences to the bereaved families of Mena deadly incident and said that unfortunately many of those killed in the incident were Iranian pilgrims. According to official figures, more than 130 bodies have been identified as Iranian victims. 360 people are missing and many are hospitalized in Saudi Arabia.”
Jannati continued about the eight years of Sacred Defense and said: “This war was truly an endless treasure and no matter what we do with regard to this great epic, it is still not enough.”
Referring to the difficult conditions in the eight years of Sacred Defense, he said: “In a very difficult situation in the country when everybody lived in anxiety and the enemy had occupied a large part of the country’s border lines, Iranian Islamic forces progressed with firm steps and poured new life into the veins of our homeland.”
He continued that we should not devote only a week to the Sacred Defense, and authors, writers and artists should fulfill their mission of informing the people more about this bright and golden period of the country. We are all indebted to the veterans and to mothers and fathers who sent their children to fight in the war and to hundreds of thousands of martyrs, veteran soldiers and bereaved families.