Third volume of ‘Stars of the Air Fight’ authored

Publish Date : Tuesday 24 February 2015 - 13:45
IBNA- Brigadier General Ahmad Mehrnia said that the third volume of the ‘Stars of the Air Fight’ (on the memories of Iranian fighter pilots aces during “Sacred Defense”) has been authored. 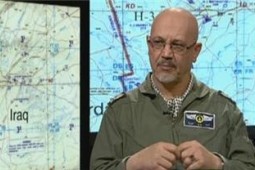 According to IBNA correspondent quoting from the website www.hhnews.ir, Brigadier General, fighter pilot, Ahmad Mehrnnia, author and university instructor, said that volumes IV and V of this series are on their way too: “Every piece of memoirs of those fighting in war can better illustrate the general scene of the war, and that we have a mission to record these memoirs to answer to many uncertainties faced by the future generation.”
Announcing that the Volume IV of this series is about to be completed and that writing Volume V will follow, he described his book ‘Stars of the Air Fight’: “While teaching war strategies at the university, I noticed the existing information about the past wars like the Crusades, those related to the time of Nader Shah and many other wars fought in the past. This is while our graduate students do not have enough information about the 8 year war we fought. So I felt responsible to record some parts of this information.”
He further continued: “My books serve as drops in the ocean of memoirs of the Sacred Defense which have got to be written and recorded. I tried in this series to refer to all air force pilots, whether piloting helicopters, fighter planes, transport planes, or what, at every air base possible during the war.”