Publish Date : Sunday 14 December 2014 - 15:06
IBNA- Oktay Baraheni , the son of prominent Iranian author, literature scholar and critic, Reza Baraheni says that publication and republication of his father's works have been facilitated and these writings harm no one. 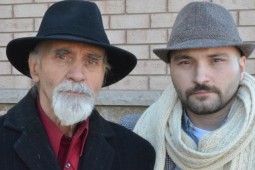 Reza and Oktay Baraheni
Speaking to IBNA, Oktay Baraheni, a debutant film director who makes efforts to prepare the ground for his father’s return to Iran stated that Reza Baraheni’s love to Iran and his desire for coming back to his homeland has been clearly articulated in one of his poems titled: ‘I Am Addressing You the Beautiful Lady Iran!’ which he composed shortly after his immigration to Canada.
Recently, two novels, ‘The Song of the Slain’ and ‘From One Well to Another’ by Reza Baraheni  were reprinted after more than 30 years in Iran due to the liberties provided by the current Culture Ministry.
A political and human rights activist, Reza Baraheni (PhD) was among those intellectuals who backed the Iranian-Islamic Revolution of 1978, but due to differences and conflicts with the government, left Iran for Canada in 1997. He has more than 60 books of fiction, poetry, literary criticism and translation in his career. He was the President of PEN Canada from 2000-2002.
Baraheni has also worked as professor in the Universities both inside and outside Iran including the University of Tehran, the University of Texas, Indiana University in Bloomington, and the University of Toronto.