Publish Date : Tuesday 23 September 2014 - 12:07
IBNA- Two cultural centers in Tehran invited Dariush Borbor (PhD), an architect and Iranologist to give an overview of the issues discussed at the International Society of Iranian Studies (ISIS) 2014, held in Montreal, Canada. 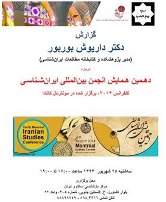 The Center for Rethinking about Islam and Iran (CRII) in association with The Research Center of Iran Studies (Saray-e Iranshenasi) were the organizers of this program the event took place at CRII office on Tuesday 16th September at 5:00 p.m.
Mr. Kyumars Amiri inaugurated the session by giving a brief general historical account of Iranian studies since its inception. Then Mohsen Ja’fari Mazhab (PhD) pointed out that the present meeting is arranged in order to familiarize those who were unable to attend such conferences. He then went on to introduce the speaker.
Dariush Borbor is considered as a pioneer of contemporary urban planning in Iran, described by some as father of modern planning in Iran. He is also considered as one of the avant-gardes of the Iranian architects who has exerted more influence on the twentieth century modern architecture of Iran than any of his contemporaries. Further to this, he has contributed extensively to Iranian studies: apart from more than a hundred papers in international academic journals, two of his major works, described by some scholars as “monumental” – A Comparative Etymological Dictionary of Reduplication in The Languages and Dialects of Iran and a book on the Bourbour tribe are due for publication within the coming months.
Dariush Borbor opened his talk by asserting the importance of Iran in historical, social, artistic, linguistic and political fields since the Elamite period which has been the reason for the flourishing of Iranian studies worldwide. He pointed out that most major countries of the world have several centers of Iranian studies, even smaller countries such as Netherlands, Denmark, Belgium and Austria have well established institutes.
He added that the accruing reasons for this in recent decades has been that many expatriate Iranian professors are active in the best American and European universities, and many benevolent expatriate Iranians have donated considerable funding and support in this respect.
Apart from numerous specialized conferences that are organized on various aspects of Iranian studies worldwide, three major independent societies hold regular international conferences. The International Society of Iranian Studies (ISIS) and the Association for the Study of Persianate Societies (ASPS) hold biennial conferences, and the Societas Iranologica Europae (SIE) every four years. Although these conferences are all peer reviewed, there is no set subject or field of study imposed on the contributors.
The International Society of Iranian Studies organizes the biggest event of around 400-550 participants. Formerly the Society for Iranian Studies, was founded in 1967 as an academic society to support and promote the field of Iranian Studies at the international level. ISIS, an affiliated member of the International Middle East Studies Association (MESA), is a private, not-for-profit, non-political organization of persons interested in Iranian Studies in the broadest sense. An elected council and an executive council run the affairs of the organization. The objectives of the society are to promote high standards of scholarship in the field, to encourage the teaching of Iranian Studies at the graduate and undergraduate levels, and to encourage and facilitate scholarly exchange amongst its international membership. It publishes a quarterly journal named Iranian Studies which is currently edited by Homayoun Katouzian. Some other events include: the Ehsan Yarshater Book Award which was bestowed on Ali Mousavi (PhD) for his book Persepolis: Discovery and Afterlife of a World Empire; the Saidi-Sirjani Book Award, this years’ winners were Justine Landau and Sarah Bowen Savant; the Latifeh Yarshater Award was won by Sharnush Parsipur; a Lifetime Achievement Award is also given, The first Life-Time Achievement in Iranian Studies Award for a Scholar Residing and Working Inside Iran was conferred on Professor Emeritus Iraj Afshar. Professor Ehsan Yarshater was chosen to receive the first Life-Time Achievement in Iranian Studies Award for a Scholar Residing and Working Outside of Iran.
The Rahim M. Irvani Dissertation Award is presented biennially to the author of an exceptional PhD dissertation on Persian literature and its cognate fields, written in any language. Established by Zinat Irvani in memory of her philanthropist husband, the winner of this year was Samad Alavi. Ahmad Karimi Hakkak was congratulated by some friends in an event honoring his retirement. A traditional Persian musical piece was performed as the closing event.
“Diversified subjects were treated by various scholars. The international tensions and social problems as well as political issues between Iran and the West were also discussed by a number of papers on current events” Borbor stated.
The President elect of ISIS for the coming year is Touraj Atabaki, and the next conference will be held in Vienna in 2016, and it is hoped that many scholars residing in Iran will participate in the event.