Dowlatabadi’s ‘The Colonel’ to be Released in Iran

Publish Date : Tuesday 18 February 2014 - 10:59
‘The Colonel’ by renowned Mahmoud Dowlatabadi will be published soon in Persian in Iran, said the author. 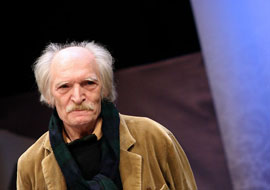 IBNA: Speaking with IBNA, Dowlatabadi asserted that many interpretations have so far been made of his book, however, he denied some assertions that it is a revolutionary work, rather, he argued, ‘The Colonel’ should better be a story of transition between two periods.

He said the book is about to be published in Iran presently.

Dowlatabadi finished the novel in 2008 and hopes to have it published by Cheshmeh in the near future.

'The Colonel' has won the Jan Michalski Prize for Literature in Switzerland.

The book, which was published by Haus in Germany in 2009, is a powerful novel on the life of a colonel who remembers his memories of families and friends in his solitude. The book concerns issues like nationality, history and family.