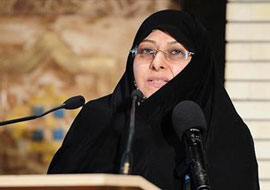 IBNA: Speaking with IBNA, she underlined the freedom movements in the world against arrogance, and added that the comparative theses in this regard by students of resistance literature and the Sacred Defense can give international recognition of the fields.

She asserted that the Sacred Defense is deeply intertwined with the lives of the people after the Islamic Revolution in Iran.

She went on to add that the subjects were introduced in the university to support the resistance culture of the people in Iran and provide the grounds for countering arrogant powers in the world.

Khazali further added that studies on poetry, literature and other literary fields have begun between Iran and other countries like Palestine, Syria and Iraq and many research works will be presented in the field.