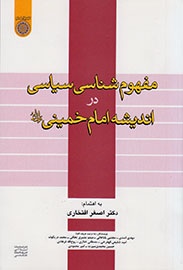 IBNA: Asqar Eftekhari, Mehdi Asadi, Mojtaba Babakhani and some other researchers have contributed to finishing the book about Imam Khomeini's political thinking and approaches while he led the Islamic revolution and the Iranian nation.

Published by Imam Sadegh University Press, the book entitled as 'Political Concepts in Imam Khomeini's Thinking' is arranged in nine chapters which are named as spirituality and politics, identity, social capital, political partnership, arrogance and suppression.

The book focuses in concepts like ethics in politics, political insight, social justice, political rituals, and the definition of the nation. One of the policies that Imam Khomeini successfully pursued was creation of a set of terms to nurture a new field of discussion when it came to his political preferences, argues the book.