Istanbul Book Fair to host China as a guest of honor

Publish Date : Monday 28 October 2013 - 10:40
The 32nd International Istanbul Book Fair will be held between Nov. 2 and 10 this year at the TÜYAP Fair and Convention Center, Büyükçekmece. China will be the guest of honor of the festival. 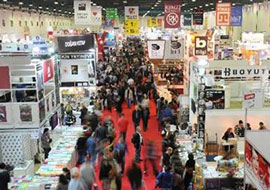 IBNA: The theme for this year’s fair will be “History: The Future in the Past.” The fair will be hosting a number of influential writers around the world on this theme.

According to a written statement made by the fair organizers, more than 100 publishers from China will be featured in the fair and events will be held featuring prominent names in Chinese literature. The publishing industry of China will meet with publishers from Turkey to explore business opportunities, Hurriyet Daily said.

Events will include interviews, panel discussions, calligraphy workshops, professional meetings and an exhibition.

The theme chosen by China will focus on the journey of Chinese literature from the traditional to the contemporary as illustrated by the concept of the New Silk Road.

The national pavilion of China will be available in the International Hall between Nov. 2 and 5, and will include almost 100 publishers from China focusing on children’s and youth literature, digital publishing, animation and games, and translated Chinese literature. More than 6000 books and 10,000 publications will be available at the Chinese booth.

Professional meetings arranged by the People’s Republic of China will bring together publishers from China and Turkey. Professional activities include publisher meetings on children’s books, translations of Chinese literature, and digital publishing.

The fair will also host a number of prominent authors from China. A total of 17 Chinese authors are expected to take part in the fair, including writer and President of the Writers’ Association of China, Tie Ning; novelist and screenwriter Wang Gang; and members of the younger generation of Chinese writers such as Zhang Yueran, Jiang Nan and Wei Wei.

A workshop will be facilitated by Pang Zhonghua, who has been one of the leading figures in Chinese calligraphic art since 1980. Zhonghua’s books on calligraphy have been national and local bestsellers for the last three years.

The Book Fairs Advisory Board named historian and academic Taner Timur the Writer of Honor of the 32nd International Istanbul Book Fair. A number of panel discussions and other events will be held with Taner Timur throughout the fair, and TÜYAP will prepare a book and an exhibition on the life and selected works of Taner Timur.