Publish Date : Sunday 29 September 2013 - 14:13
Head of the 4th Festival of Resistance Flash Fiction has said that over 200 pieces have been so far submitted to the secretariat of the festival. 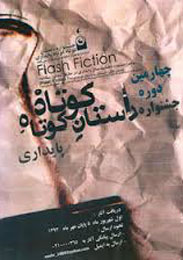 IBNA: Reza Haji Abadi has said that submission of works began last month and will be ended by the end of the current month.

Hamrah Aval, Payam Afzar Paik Asa and Sacred Defense Museum Garden are some of the major sponsors of the festival, he said.

He added that stories are submitted by cell phones, saying that a new story-writing course has been developed by Hezare Ghoghnous Publications on the sidelines of the festival.

He went on to add that everyone interested in submitting their works to the festival should send their stories to 0210000365.

Furthermore, those interested in taking part in the story-writing course should send the number 365 to 20123.