Foreign versions of 'Atlas of Iran-Iraq War' to be released

Publish Date : Sunday 23 June 2013 - 14:58
Manger of the Military Geography Group of the Sacred Defense Research and Document Center said that the 'Atlas of Iran-Iraq War' will be published in English, Arabic, French and Russian. 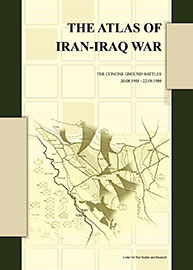 IBNA: According to the public relations office of the center, Nader Zarezadeh said that the book will be released by the end of summer.

The work was presented at the 25th Tehran International Book Fair and sparked a lot of interest among the fair’s visitors.

The French-Russian version of the book was presented at the 26th Tehran International Book Fair and the work on its English, Arabic, French only and Russian only versions has been finished. The versions will be released by the end of the current summer, he said.

The atlas is a great war reference and included all prominent operations during the war.

“We are negotiating for presentation of the foreign language versions of the atlas at international exhibitions,” added Zarezadeh.

Each page of the atlas entails details about every operation during the Sacred Defense.