Publish Date : Saturday 8 June 2013 - 16:47
Commander Mohammad Ali Asoudi, cultural and promotional deputy of the Army of Guardians of the Islamic Revolution (Sepah), announced that as many as 595 works have so far been submitted to the secretariat of the Sepah Book of the Year Award. 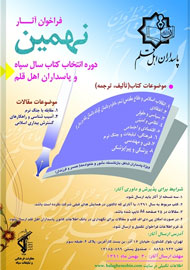 IBNA: Speaking with IBNA, Asoudi stated that the closing ceremony of the festival will be held on June 22, 2013.

As he said, the works have been sent by 315 Sepah writers. Besides, 368 works of the submitted items are authored works.

He further added that 40 translated works have also been considered by the panel of judges in addition to 187 articles.

Moreover, 98 articles on cultural and religious subjects, 109 works on Sacred Defense and Islamic Revolution literature, 57 technical works, 30 legal items, 29 works on military and security, 48 works on medicine and paramedics, 26 works on society and economy and 11 works on Soft War have been sent to the secretariat of the festival, he went on to add.