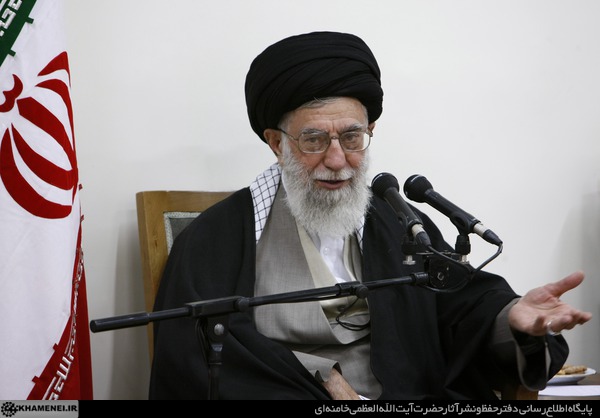 IBNA: According to the information center of Ayatollah Khamenei Works Publication and Preservation Office, staff of the bureau met with the Supreme Leader of the Islamic Revolution Ayatollah Seyyed Ali Khamenei on Monday, May 13, 2013.

During the gathering, the Leader posited that the activities pursued in the Arts Bureau (Howzeh Honari) cause a massive, inspiring and provocative movement in the field of Islamic Revolution and resistance literature which prevents some anti-Islamic Revolution currents, stressing that the movement should be heading forward and kept effective in the country so that it would no longer need imported literature.

The Leader further stressed the need for strengthening the research section of the bureau in the resistance and Islamic Revolution field, and added, “Albeit, this should not be confined to western research methods, and innovative and wise methods should be devised in this way.”

Elsewhere in his remarked, the Supreme Leader reminded the audience that the oral history recording style should be considered in Islamic Revolution and resistance productions.

Prior to the Leader’s statements, a number of the members of the Bureau aired their views and concerned to the Supreme Leader.