Publish Date : Wednesday 1 May 2013 - 13:16
North, a 1960 novel by the French writer Louis-Ferdinand Céline which has been rendered into Persian by Mahmoud Soltanieh, is being presented at the 26th Tehran International Book Fair. 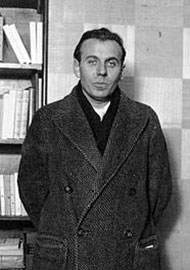 The story is based on Céline's escape from France to Denmark after the invasion of Normandy, after he had been associated with the Vichy regime. It is the second published part, although chronologically the first, in a trilogy about these experiences; it was preceded by Castle to Castle from 1957, and followed by Rigadoon, published posthumously in 1969. It was the last book Céline published during his lifetime.

Louis-Ferdinand Céline was the pen name of Louis Ferdinand Auguste Destouches. He was a French novelist, pamphleteer and physician. The name Céline was the first name of his grandmother. He is considered one of the most influential writers of the twentieth century, developing a new style of writing that modernized both French and world literature. Céline's best-known work is Voyage au bout de la nuit (Journey to the End of the Night).

Some of his books including Death on Credit, Castle to Castle and Journey to the End of the Night have been translated into Persian and released in Iran.