0
Recommend
A Novel in Persian 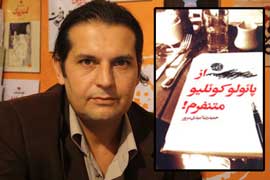 IBNA: "I Hate Paulo Coelho" relates a love story in social context. The main character of the novel named Reza is a pessimist writer with a number of failures. Reza-in-love encounters new people and situations that moves the story to new spaces.

The novel is written in a simple and colloquial language mostly related in internal monologues. The writer in this book tries to probe into the minds and lives of different social classes through a romance – social classes that each demand different things and have different dreams.

The story goes as "Qazal had read the 'Alchemist' and was influenced by it so much that she believed the book had saved her life in a period of mental crisis. At that moment it had not crossed my mind that 'You Fool! When someone asks your opinion on something in the very first date, it means that she really cares for that and your opinion does matter…."

"I Hate Paulo Coelho" is published in 400 pages and 1650 copies by Amout Publications.

Hamidreza Omidi Sarvar is a mechanical engineering graduate with publications on film criticism.