Publish Date : Saturday 3 September 2011 - 14:06
Works of three Iranian illustrators were chosen at the Illustration Contest of The Teatrio Cultural Association, which was on the theme of “The Cannonball Lady”. 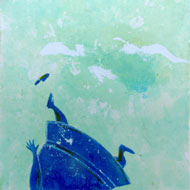 The Expo will display works of 24 illustrators chosen at the contest of “The Cannonball Lady”.

The selected illustrators include 5 artists from France, two from Atlanta, three from Iran, three from Italy, two from Mexico and two from Savannah. Moreover an artist was chosen from each country of Portugal, Mongolia, Germany, Romania and South Africa.

The 1st and 2nd prize were bagged by illustrators of France while the 3rd prize was grabbed by Kelsey Garrity from Savannah.

The awarding of prizes ceremony, the opening of the exhibition, the presentation of the catalogue and the seminar will be held at the Civic Museum of the South Lagoon “San Francesco fuori le mura” - Chioggia (Venice).

The Teatrio Cultural Association was established in March 1988 with the 1st edition of the Biennial Exhibition of the Illustrated Book for Children. Teatrio promotes exhibitions, competitions, illustration workshops and seminars and in this way grants numerous requests on behalf of famous and young illustrators.